Rajma Masala | Punjabi Rajma Masala | Rajma Chawal | Rajma Rice is a lovely spiced ,rich and creamy curry made with kidney beans. Prepared with a delicious onion and tomato gravy base, seasoned with some beautiful and aromatic spices to make it just irresistible. Relished best with rice tempered with cumin seeds and caramelized onions. Can be served with roti, naan, prantha, plain rice, pilaf  and masala rice(which is my favorite).

A complete serving although should accompany a nice creamy boondi or vegetable raita and salad along with masala poppadoms.This is the way we Punjabi’s serve Rajma Chawal / Rajma Masala in our households.Also few times, to make the flavor reach the epitome and drown through our eyes we even club it with fresh green chilies.Our tears flowing from the eyes tell our story of how we love eating our Rajma Rice all spiced up and chili. But of-course ,you adjust the spice meter according to your eating preference. 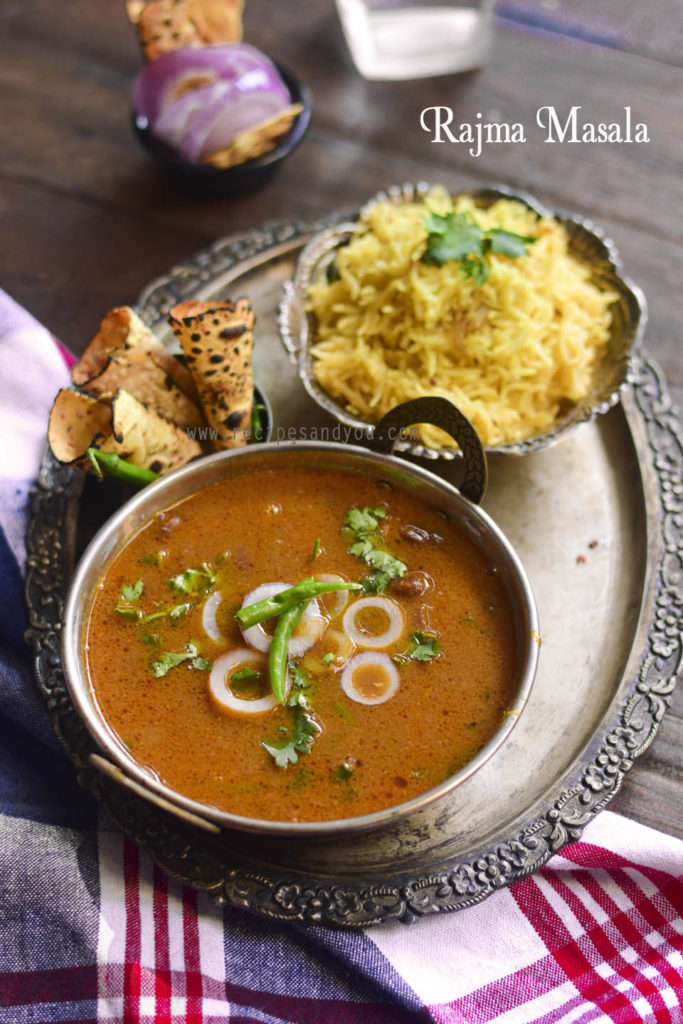 As a kid whenever anyone asked about my favorite dish or something i like to have just anytime,was invariably-Rajma Chawal. And it was the same for most of my family members and friends. Rajma Chawal is the most cooked and celebrated dish for us north Indians.Its a daily routine and a party food too.If its a wedding ,party,or any formal occasions where there the cuisine is Indian, you’ll find Rajma Chawal on the menu for sure.Other few are Dal Makhani and Pindi Chana.( click the link for recipe).

There are various types of Rajma available in the market. Amongst the most popular are chitra and Kashmiri. Chitra Rajma- are pale red beans with red spots and the Kashmiri rajma are the deep red beans. They differ a bit in taste and texture and also in terms of thickness of gravy. Kashmiri rajma are firm and do not go very soft and chitra rajma are cooked quickly and get very soft and have a thicker gravy once cooked.Its personal choice which one you want to use.I somehow prefer to mix the two while cooking .The ration is 3:1, 3 parts Kashmiri and 1 part chitra. But the this recipe prepares one variety with gravy.You may or may not mix.The preparation will not differ. 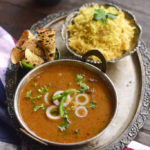 This site uses Akismet to reduce spam. Learn how your comment data is processed.

Hi, Am Aditi ! Welcome to my Blog! Am a recipe developer ,food writer and blogger based in Delhi,India.From being a Banker to a Food Blogger, my journey from figures to flavors commenced after my son was born. Now,its a passion. I just love cooking ,developing new recipes and my new love for Food Photography. Am a self taught cook and just learning my way to good food photography. I believe in keeping a healthy lifestyle and eating healthy food.This blog is a document of my exploration/adventure with Food .If you like my blog ,do leave a comment.

Hi, Am Aditi ! Welcome to my Blog! Am a recipe developer ,food writer and blogger based in Delhi,India.From being a Banker to a Food Blogger, my journey from figures to flavors commenced after my son was born. Now,its a passion. I just love cooking ,developing new recipes and my new love for Food Photography. Read More